We regard the existing social conditions as exclusionary and inhuman. They have long been shaped by traditional notions of gender and relationships as well as racism, anti-Semitism and nationalism. On so-called „poor and lazy people“ one looks down, and people with assumed disabilities are treated with contempt. And with that we are far from having grasped and listed everything that leads to people being denied a „good life“ every day. We live in a time in which all these rigid (right-wing) ideas and attitudes are becoming stronger again and are spreading more and more. Capitalism prevents a just organisation of society according to the different needs, just as a responsible handling of the world with all its human and non-human inhabitants. The fairy tale „everyone can make it, if he/she only makes an effort“ still leads to the fact that this unjust economic system continues to exist. The division of people into categories such as „nationalities“, „sexes“, „healthy“ and „sick“ are instruments of power with which social inequality is created and justified.

Our goal is to leave the above behind and to think of new ways of living together in solidarity, in the here and now.

Although, we are aware that we ourselves have internalised various mechanisms of oppression and relish privileges that other people may not have. We therefore consider it important to question ourselves critically and to be mindful in dealing with ourselves and other people. We also do not always agree on a same way to a better form of society, but we understand this contradiction as absolutely necessary in order to always remain critical on the way there – and that’s why respectful discussions are always part of our self-conception.

We are aware of the difficulty in implementing this claim. But we still think that it is necessary for initiating solidary change.

So, we want to be in solidarity, that is to stand up and to be there for each other.

What unites us are our common goals, dreams and wishes.

We want to be attentive to solidary alternatives and attempts that already exist and try to learn from them.

We want to courageously create new ideas about the future and our living together – we want to make utopias realistic again. 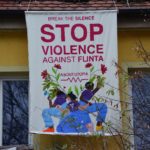